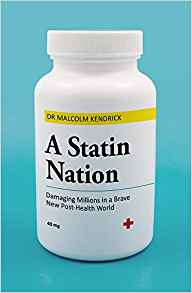 Confession – I like Dr Kendrick’s writing.  I’ve reviewed Doctoring Data and The Great Cholesterol Con here.  In many respects this latest book brings both of those together with equal measures of scepticism for both the Cholesterol Hypothesis and the data which supports it and tends toward over medication.

As the title suggests this book takes on the hypothesis that Statins are over prescribed – partly though unsupported prescribing guidelines; partly thorough prescribing by numbers; partly through influence of big pharma.  Of course, I’m not a doctor, there may well be valid challenges to Dr Kendrick’s views, and he is out on a limb.  But what he writes is plausible and well constructed, and the position he takes coherent.  In summary thats a position that dietary cholesterol has no correlation with blood cholesterol, and in turn blood cholesterol has a tenuous link with Cardio Vascular Disease (CVD) which, lets face it, is the nasty we are trying to dodge. Dr Kendrick tackles this in depth, looking at the physiology of cholesterol, how statins work, CVD itself, adverse effects of statins, and what the research really says not what the drug industry would want it to say.  As I say, I’m no doctor, you would need to read this yourself and draw conclusions, but its plausible.

Dr Kendrick then goes on to postulate on what he considers are the major causes of CVD and how to avoid them – stop smoking; take exercise; spend time in the sun; do yoga (yes!); good social bonds; natural low carb diet, not worrying about fat or salts; a few key supplements;avoid over medication; don’t worry obsessively about health.

As usual he writes well, with a good balance of technical insight versus readability versus belligerence, and this is a book I would recommend for anyone in complimentary health, or who is interested in their own health.  Its an eye opener, and in ways wider than just the statin tablet itself.

You can buy the book, on Amazon, and using this link generates a small commission to Yinspire
https://amzn.to/2URxOjL