The What and Why of Yin Yoga 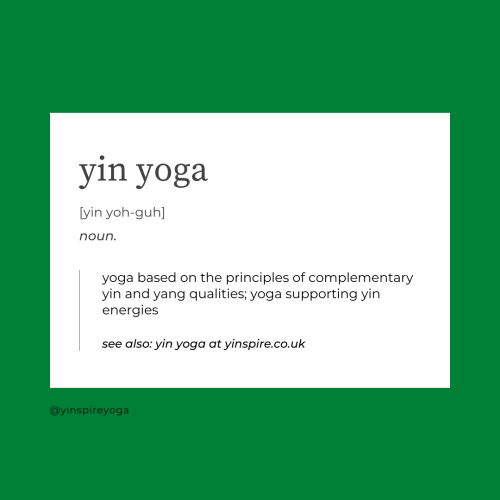 There are many modern yoga styles, which begs the question “What is special about the Yin Yoga style I teach at Yinspire?”

Like much in the Yoga world, the origins are slightly murky.  Modern Yin Yoga is considered to have been developed and loosely packaged by Paul Grilley, who wrote the first manual on Yin Yoga as we know it in 2002.  However, that doesn’t mean Yin Yoga is new – its lineage is part of the whole lineage of Yoga, going back thousands of years.

Many modern yoga styles, especially in the West, are orientated to strength and flow, with a dynamic element to them.   By contrast Yin Yoga is a quieter less dynamic practice.

Yin Yoga has the intention of working with the balance of Yin and Yang energies in the body.  The traditions of Chinese Medicine suggest that Yang energies are active and effort led energies, encapsulating much of achievement led aspects of daily life, whereas Yin energies are more inward, calming and settling.

Yin Yoga could therefore be considered the balance to the Yang efforts of daily life, including work, leisure, exercise, and more active Yoga practices.

In practice this means a Yin Yoga class involves taking simpler Yoga postures, often supported by props like bricks, blocks, bolsters and blankets, and holding those postures for a few minutes, paying attention to how the body feels, how we are breathing, and to the tendencies of the mind to wander off.

One of the quotes which I feel encapsulates Yin Yoga comes from Sarah Powers, a well-known Yin Yoga teacher from the US, “unhurried postures unstained by striving” – to me that explains how Yin Yoga acts as a counter to busy and hurried lives.

Different teachers interpret Yin Yoga in different ways, and that’s one of its attractions to me, it is an adaptive and flexible approach to yoga, rather than one that’s rigidly based around one person’s interpretation of Yoga.

If you have a busy life, of feel the effects of stress and over activity, then Yin Yoga may just be the thing you need to get some balance.

You can learn more about Yin Yoga and Yinspire at www.yinspire.co.uk, where you can book a class and find out more about my studio near Brading.