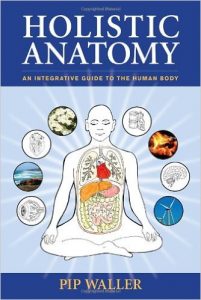 On holiday last year we stumbled across a bookshop selling only – only! – yoga/mind/body themed books.  From the haul I came away with – limited by carrying capacity – this is one of the first titles to reach the top of the reading pile; I had my eye on it for a while, it just got pushed to one side.

However it was with the wait.  Anatomy and Physiology – A&P to use the lingo – can be a dry, sometimes weighty topic.  It can also be very narrow in its outlook adopting a scientific reductionist approach rather than an expansive holistic approach.  This book avoids reductionism and, as the name implies, takes a holistic approach.  Put simply not only how does out body work, but how does its facets interconnect?

The first part of the book, and it’s greater part, is a look at each body system individually.  By its nature this is technical and scientific, but also tied in holistically to the sum of the parts – how body systems work together.  I think I would describe the authors approach as scientifically sceptical – not falling into the trap of buying up medical science uncritically but equally not falling into the trap of dismissing it in favour of dated superstition and myth – a difficult balancing act but one the author seems to have pulled off.

The second part of the book, shorter, is a look at health and disease from an holistic viewpoint, again drawing both from western medicine and holistic therapies, concluding in looking at Five Element theory and Shamanism in more depth as a compliment to allopathic based responses.

I liked the way the author tackled head in death and dying, noticing that it’s a natural occurrence but missing from most a&p texts,

“Each person dies at the right moment – for some, this may be surrounded by others, for others, alone.  Some people seem to hold off or bring on the moment of death, dying just after someone from out of town arrives, or after an important anniversary.”

Later, echoing my own experience in the dissection room, where so often the lesson is as much about philosophy as science,

“As a student of herbal medicine, I visited a morgue with a group of fellow students. One of the people being dissected was a ninety-six year old woman who had died in her sleep.  Because she was healthy and not under a doctor’s care, she had to be given an autopsy.  It turned out she had died from a massive stroke – half of her brain had turned to liquid.  This kind of death, most definitely from old age, is the kind many people wish for.  It is a shocking but valuable experience to be in the presence of death.”

A well written book and worth a place in the reading list of anyone interested in a holistic approach to anatomy either as a body worker or other professions, or a curious lay person.