Book: The Universe in Your Hand – Christophe Galfard 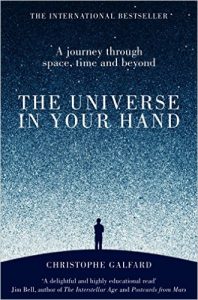 I suppose I’ve always had a curious mind, and during a week of travelling to London for a course this summer I picked up this book on Waterloo Station – promising a journey through “Quantum Mechanics, General Relativity, Time Travel, Parallel Realities and Multiple Universes” – ok, lets go!

The reality is that distilling the life works of many eminent scientists into a 400 page book was always going to be challenging, and this book can thus only ever be an oversight and, in reality, not all of it is going to sink in first read.  Probably not second or third read.

However the author has a good way of simplifying and explaining, and I certainly came away knowing more about these areas than when I started.

As a Yogi – and a Christian – there can sometimes be a clash between the rational – what can be known by touch – and faith – whats understood but not evidencable.   One thing this book highlighted was the need to suspend our normal limits of belief and understanding, limited by the capacity of our mind, to understand what science now knows:

3000c temperatures.  The inflation of the universe by a factor of 1026 (a lot of zeros) in 10-36 seconds (a very small fraction of a second) after the Big Bang. Universes in Universes.  Multiverses.  Small particles, the smallest we know of.  Quantum effects.  Schrodingers Cat.

Its a lot to take in, thats for sure.  But these things are what we know at the moment.  Can we honestly say we – as humanity – know everything?  What more is there to be learned?  The author, as a scientist, is honest about his disciplines limits.

And so to Yoga – sometimes Yoga requires is to accept what our mind cannot understand, Prana and Chi for example, Nadis and Meridians.  A concept of Prakriti and Purusha.   Will these things ever be “proven”?   Maybe, maybe not.  For some of them, eg Meridians and Nadis, there is some evidence already.

Somewhere there needs to be a cause of causes.  We are told that science stops just at or around the time of the “Big Bang”:

“There, our universe becomes a mystery in which twenty first century sciences, beliefs and philosophy are intertwined.  In a way, this is where our knowledge stops, and where pure theoretical research takes over”

In a way for me, as well as pure learning, the enjoyable part of this book is that there are no ultimate answers.   We can probe, we can learn and understand more, but there is more beyond.  There always is.  At the micro level, thats something I’ve come to appreciate in my anatomy studies – we can understand the make up of a cell in terms of its building blocks, but what about the makeup of the building blocks that make up the cell?  And so on, ever more reducing until we reach the limit of comprehension.  But thats a false limit – whats beyond?

As a child I used to wonder where infinity ended.  I still don’t know, I simply can’t comprehend it.  But for me science and belief sit together to help me understand my place in it all.  Yoga embraces both.

So, a book I would recommend for the armchair philosopher and curious – so much to learn, including the limit to what we, as humans, can learn.