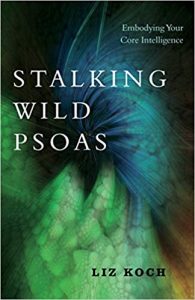 Those with anatomical knowledge will know it as a muscle, running from the lumbar spine and weaving into the posterior aspects of the diaphragm, and travelling over the pelvis, behind reproductive and digestive organs, to arrive at the lesser trochanter, inside the top of the thigh bone.  Its the only muscle that connects the legs and spine, so it has a important role in our bodies.

So this is an anatomy book right?  Most certainly not.  The Psoas is an enigma; get three anatomists in the room and you’ll probably get four opinions on what the Psoas does.  Is it a muscle of stability?  A muscle of movement? A muscle of breathing?  A hip flexor?   All of these; more; and none of these.  The Psoas is deep, and difficult to touch or palpate; in dissection training I’ve had the privilege to handle a selection of different Posas muscles – some are flat and belt like, others round and rope like, the latter being the image you’ll see in anatomy.  The deep and somewhat variable nature of the Psoas lends to confusion, as does the fact that its not actually best placed to play a major role in any of the functions at the start of this paragraph.

The author has written one of the seminal works on the Psoas, The Psoas Book, in which she describes it as “belligerent and difficult”; and here we arrive at another credible explanation on the Posas’ role – a muscle of emotional intelligence.  Done some deep hip opening work in yoga and gone home cranky and wanting to burst into tears?  Hello Psoas.

In this book the author sets forward what are described as nine essays on the Psoas – how, in her experience, it embodies our energetic core; how the reductionist language of classical anatomy misleads our understanding of our development; how embryology may give us different insights; how Psoas can be seen as an organ of perception.  Its a fascinating work, maybe at times a bit “out there” but thought provoking none the less as we start to dissolve preconceptions from years of reductionist anatomy and body work; the author encourages us to think as a whole rather than parts, with Psoas being part of the larger picture around emotional intelligence in our bodies.

I say, certainly not an anatomy book, at least not in the classical sense, but if anatomy is the study or organisms then from an energetic perspective this is holistic anatomy.

I would be doing the book a disservice to pull out one or more topics that interested me, suffice to say it was thought provoking, and useful.  Its a book I would endorse to anyone wishing to explore being human, mind body connection, and who want to start to think about how emotions are embodied.   If its not too trite, a book for those thinking outside the box.

Stalking Wild Psoas: Embodying Your Core Intelligence can be purchased on Amazon, and using this link Yinspire earn a small commission