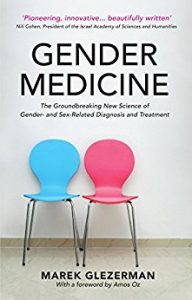 The subtitle to this book is “The Groundbreaking New Science of Gender and Sex Related Diagnosis and Treatment”, and the author purports to look at sex and gender related differences and how these impact health and medical treatment. This isn’t something just of interest to doctors – it’s something that effects us all as individuals, after all who doesn’t want an individualised understanding of health?

Whether this is truly “Groundbreaking” as the author suggests is debatable, but that doesn’t detract from the importance of the content.

We learn of differences in the GI tract, with transit times being slower for men than women; this impacts, for example, how alcohol is absorbed differently by men and women, or how the dosage of drugs should be calculated. The authors suggest that our cultural norms around meals may need to change – with slower digestion, women should maybe eat less often than men – men four times a day, women twice a day, is suggested – but society has us all eat at the same time?

Likewise we learn that pain receptors differ in men v women, and the implications this has for anaesthesia and pain medication, where it’s suggested differential dosing is needed.

We learn that many drug tests were conducted on men as it avoided difficulties from accommodating menstrual cycles in drug trials, and the risk of damaging eggs or a foetus. However the flip side of this is that much useful understanding about how men and women react to drugs is lost, leading to a depersonalisation effect.

There is much other content – foetal development, the stresses the reproductive cycle, temperature regulation, to name but a few areas covered.

This is most certainly not a book suggesting women are badly treated by medicine. The author looks at the topic of infertility for example and how this effects both men and women but differently. Likewise the author looks at genetics and how genetically men may be defined as the weaker sex and at risk of dying out in a couple f hundred thousand years – make of that what you will!

If I had one gripe, it would be the author dismisses the divide between sex and gender, and thus the degree to which differences are chromosomal or cultural. Likewise the implications of care in LGBTIQ circumstances is bypassed, and realistically could have been one or two additional chapters.

In all a really useful book for anyone interested in the body and caring for it, and a book I’d recommend to others.

You can by the book on Amazon and if you use this link, Yinspire earns a small commission
http://amzn.to/2xFCuOn