Book: Freedom in Exile – Autobiography of the Dalai Lama 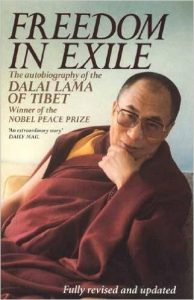 Over the past few years my life has drawn me towards Buddhist practices, particularly ethical and meditative, and I suppose I would now identify as “Buddhist leaning Christian”, but growing up in a Christian environment I know very little of the back story of Buddhism, in particular the Tibetan Buddhism history and context.  Like many in the yoga world, my interest has been the juxtaposition of Yoga Practice, Buddhism and Western Spirituality on a practical basis.

So reading this book was part of a process of learning a bit more about the cultural roots of Buddhism – and where better to start than the Dalai Lama, the spiritual leader of Tibetan Buddhists and head of the Government of Tibet in Exile.  In fact I was put on to this by another book I was reading – a review to follow – which touched on the Dalai Lama’s interest in the intersection of science and faith.

As you’d expect from an autobiography the book takes a loosely chronological path through his life and work, before closing chapters reflecting on the current state of the world, temporal and spiritual.  I confess I knew very little of the traditions and ritual surrounding Tibetan Buddhism, nor of the difficult relationship between Tibet and China, which the Dalai Lama had to try and mediate and ultimately flee from.

We learn about how the young boy was identified as the Dalai Lama, his education and schooling, his hobbies and interests – repairing watches and taking things apart – who knew!  We read his reflections on various world leaders and the political situation around him.

So, a lot to learn, and this was a useful little book to give some context to someone I had heard off but knew little about, and to the culture behind some of the practices known in the West.  As an autobiography this isn’t a text book, or practice manual, so if your interest is in learning about practicalities of Buddhist practice, then this book will disappoint.  On the other hand, if you have a curious mind and want to know something of the person of the 14th incarnation of the Dalai Lama along with some of the cultural setting of the Buddhist way, then this is a useful book.   Its 300 or so pages, a fairly easy read, and in my view worth it.

The book can be bought on Amazon and if you use this link Yinspire earns a small commission.