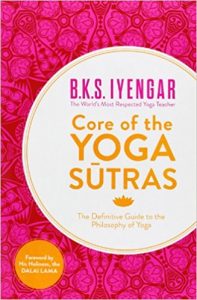 As one of the foundation texts for yoga, the Yoga Sutras of Patanjali are something most of us come across, either as structured study or by osmosis during class when themes come up.

The sutras themselves are quite terse, so need interpretation – remember Sanskrit doesn’t translate directly to English – illumination and commentary.  There are many such commentaries out there, and this is the late Mr Iyengar’s offering from 2012.

I’ll be honest and say this isn’t an entry level commentary – the author says as much when he explains it’s his second book on the topic:

“I published my book Light on the Yoga Sutras of Patanjali in 1993. Now in the light of my experience and the wisdom I have gained since then, I am attempting a new offering, in which in which I have considered the hidden links inside the text in order to unveil the core meaning, or heart, that is implied in the sutras. In accordance with this core meaning, I have re-evaluated, rearranged, decomposed and restrung the Yoga Sutras”

With a text like the Sutras, although you can read them from start to finish, learning about them, I feel, requires several readings from several different commentators, and assimilation over time. To this end, I don’t think this is the best version of the Sutras for someone who has never read them before, but for someone who has some initial understanding it’s a great book to further develop critical thinking around Yoga theory and philosophy.

The author draws not only on the Sutras but also heavily on the Bhagavad Gita, the Upanishads and, to a lesser extent, the later Hatha Yoga Pradipika, stringing thoughts from all these sources into his work. It’s not a sequential commentary, more the authors attempt to classify and draw out the content, resting on experience and study.

What I liked was the drawing out of the authors own experiences and his personal insights weaving through the text, and having read several other translations of the Sutras, I enjoyed seeing a differing perspective – like looking at a mirror ball, each direction of sight gives a differing reflection.

“Yoga is a discipline meant to bring cohesion between body, mind, intelligence, consciousness and the seer. It draws those who are interested, holds their interest and shows them why it needs to be practised.”

So, probably not an introductory book in the topic, but one for people with some understanding in the area to be stimulated and see differing perspectives.

You can by the book on Amazon and if you use this link, Yinspire earns a small commission
http://amzn.to/2A2ed6O