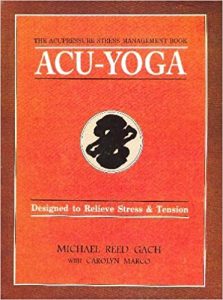 The first thing to say is that this isn’t a new book – 1981 – although its the first time I’ve read it.  Some things don’t change though, including Traditional Chinese Medicine (TCM).

Its in TCM that this book is based, more correctly accessing techniques of TCM through Yoga.  To a degree the name gives it away – this is Acupuncture via Yoga, hence Acu Yoga.

But lets back up.  Fundamental in TCM is the concept of meridians – energy lines in the body named after organs which the pass through – which carry Yin and Yang energies, known as Chi, and have energy points which can be used to regulate various qualities of Chi.   At first glance the organ names linked with meridians are confusing as they don’t necessarily correlate to our current understanding of organ function within western biomedical anatomy – but rather than that be a reason to dismiss TCM wholesale, its better to just note that the organs are understood from a different perspective in TCM and critically this doesn’t concur with gross anatomical functionality – the TCM understanding is around energetic action rather than gross anatomical action.  So, this sounds a little new agey?  Far from it, the key with TCM is the “traditional” – this is an understanding of the body which well pre-dates contemporary science and which, over passage of time, thousands of years, has been shown to be effective.  In a short book review like this, I’m not going to get into work thats been done to prove or disprove the efficacy of TCM interventions, except to say even in the western bio medical model things change and move all the time, and some treatments simply don’t work for unknown reasons – or indeed some do work but unexpectedly and for unexpected reasons – likewise sometimes a TCM intervention works, sometimes it doesn’t.  Neither western nor eastern science is exact when it comes to medicine.

Of course the meridians aren’t present in a cadaver in gross dissection – and some readers will know I’ve done more than a bit of that – however some researchers have correlated the meridian structure to anatomy in the body in different ways – for example looking at voids in the body’s connective tissue network, how the meridians and energy points relate to foetal development, or looking at electrical connectivity in water dense tissues – from this perspective a tentative overlay of a TCM anatomical model to a western bio medical model can be achieved, although there is a large element of trying to prove the unprovable as they are very different models.  Doubtless scientists will still be wrestling with this for many years yet.

All of which is a rather lengthy way to say that TCM has its place and whilst it is very different to western biomedical understanding, it shouldn’t be dismissed, particularly as a supportive treatment alongside modern western treatments.

For the most part our modern familiarity with TCM is through acupuncture – where energy points on the meridians are needled – but the same effect can be achieved though pressure on a point – so called acupressure –  hence the concept of Acu Yoga – using yoga techniques to stimulate energy points via acupressure.   Whereas acupuncture or pure acupressure are delivered more precisely, Acu Yoga works on similar principles but on a more broad basis.

A lot of the principles of Acu Yoga find themselves into the Yin Yoga practice that I work with, and arguably Acu Yoga was a forerunner to Yin Yoga.

And so to this book.  It starts with a general rehearsal of the principles of Acu Yoga and TCM, largely as I’ve covered above, and then progresses to suggest Acu Yoga techniques for each meridian and a sample general practice focused on using Acu Yoga body wide.  The final part of the book is a look at various specific conditions – eg back pain, digestion – and how Acu Yoga could be tailored to assist with these.

The postures themselves aren’t new, and for the most part will be familiar to a regular yoga practitioner.  What will possibly new is the language and how postures are brought together.

Overall I found this a useful book to shine a different light on yoga tradition, and whilst not for a beginner experienced yoga practitioners will probably find the content useful even as background and expansion of current practices.

One word though – currently the book is retailing at £164 on Amazon – do shop around – I’ve had it on my shelf a while, but I’m sure I didn’t spend that much!