Yinspire started as the trading name for Jessica’s classes back in 2015 – since then, and with the opening of studio space, Yinspire has grown into two private studios hosting my classes, my Yoga Therapy business and Guest Teachers

Jessica’s vision is to see the studios grow into a local yoga community; supporting yogis; supporting the wider community through sharing yoga; and supporting Isle of Wight Yoga Teachers. 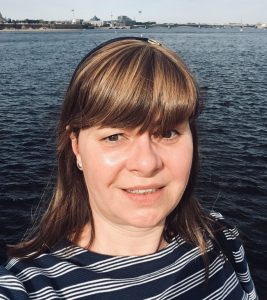 I started exploring Yoga in my mid 40s – it had been on my “to do” list for many years but never quite happened.  One day I saw an advert for “Yoga and Brunch” and thought that sounded a civilised way to brighten up a dull January Saturday morning.

From that very first class I was captivated with Yoga, before long attending classes a week, along with additional workshops, the first steps toward a home practice and starting to devour Yoga books.

It was perhaps inevitable that training as a Yoga teacher would follow in due course.

Away from Yoga my background is Accounting and Tax, which I still practice, including accounting for yoga teachers. When not at work I enjoy fresh air – whether walking or cycling on land, or at sea on our family motor yacht – and having my nose in a good book with a Gin & Tonic.

Although I would describe myself as Liberal Christian, I have a strong interest in eastern spiritual ethics and practice, and this illuminates aspects of my practice and teaching.

Most of the regular teachers I have worked with come from a Hatha or Vinyasa style of Yoga, and these have been the foundations of my own practice.

My Yoga Teacher Training Tutor came from a Satyananda lineage and this has influenced my own practice.

In 2012, recovering from a fracture, I discovered by myself a slower quieter side to Yoga, which I later came to understand as Yin yoga.

All these influences come together in my practice and teaching, which I refer to as Yin Inspired Yoga.

More recently a lot of my time has been spent studying experiential and functional anatomy, and the physiology of stress, which led to a formal training in Yoga Therapy with Minded Institute London, and introduced a distinct therapeutic aspect to my classes.

My Yin Inspired Yoga style is an adaptation of a classic Paul Grilley/Sarah Powers Yin Yoga practice, however I also include, as appropriate:

In all this the emphasis remains on a slow floor based practice though.

Amidst all the seriousness, I also think Yoga should be fun and relaxed, and approached with humour – you should leave the class feeling better than when you arrived.

Yinspire is an LGBT friendly business, committed to promoting equality and inclusiveness across all gender, race and sexuality identities.

CPD and other training

Here are some of my recent musings:

I devour books on yoga – here are some of the books I’ve read, and reviewed, recently:

Yin in the Garden
Monday and Tuesday morning
Monday evening

Find out more or adjust your settings.