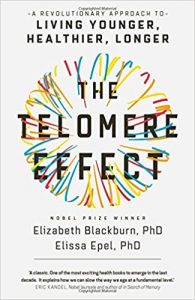 One of the things – just one – that inspires me around study in human sciences is just how much we don’t really know, and how much there is to still understand and still come to know.  A bit like Donald Rumsfelds “known knowns and known unknowns”.

And so to Telomeres and their associated enzyme Telomerase – in the 1980s you wouldn’t have heard much about these.  The existence of Telomeres had been known of in the 1930s but not much more than that around understanding.  Then in the 1970s a team of researchers found more about how Telomeres protect our DNA and Chromosomes, and in 1984 one of those researchers Elizabeth Blackburn – one of the authors of this book and a Nobel prize winner for her efforts – discovered the Telomerase enzyme initially in Pond Scum (her words), and bits started to fall into place.

Telomeres are a set of protective cells at the end of each of your Chromosomes, and work to prevent mutations in DNA.  So far so good.

What research found was that the Telomeres – arranged as a chain of cells – shorten as we age, and they were a good predictor of health and well-being.   Put simply, longer Telomeres correlate with being more healthy.

Alas, you can’t go to your local drug store and by Telomere top ups – wish we could, it would be the elixir of life.  But what was discovered was that the rate of decline of Telomeres, and indeed an improvement in their condition, is moderated by an enzyme known as Telomerase – and this we can control indirectly.

And so its come to be understood that a healthy lifestyle uprates Telomerase and thus protects and improves Telomeres themselves, in turn protecting us from ageing at a cellular level.

Of course, its valid to say age comes to us all.  But you know how some people look old before their time?  Some people have health till old age, others go though life with a succession of  illnesses.  This is all correlated with Telomere length.  Thats not to say Telomeres and Telomerase is the only cause of ageing and ill health but its at the centre, and to a strong degree influenced by a healthy lifestyle.  Included in the conditions correlated with reduced Telomere length are cancers – this doesn’t mean cancer is caused by lifestyle failings per se, that would be too simplistic, but there is a link via cell mutation between cancer and Telomere length – simplisticly longer Telomeres, all other things being equal, means greater resistance to cancer and other diseases of ageing.

Some of the things lifestyle wise which are known to effect Telomere length are:

Many of these are factors where yoga, mindfulness and a yoga inspired lifestyle can help.  For example yoga gives us gentle exercise and promotes good sleep, yoga can help us manage our stress and emotional responses, and yoga teaches us about a healthy approach to nutrition and toxins.

That doesn’t mean a yoga class a week is a get out of jail card!  You would need to be practising more regularly, both on and off the mat, but yoga can certainly signpost us in the direction of small wins toward Telomere and Telomerase promoting lifestyle.

It also helps to show the power of a yoga practice, and why a rounded yoga practice needs to be more than mere stretching and movement, but a balanced practice for mind and body.

So, to this book.  The book covers both a history of Telomere and Telomerase research, the basics of how they work and why they are important, and what practically we can do and change in our lifes to uprate them.  Its an eminently practical book, and strikes the right balance between detail and practicality.  I would say its a suitable read for yoga practitioners, yoga teachers and anyone else with curiosity about practical life sciences and how lifestyle and health are linked.  Its a book I’m happy to recommend.

The book can be bought at Amazon, and if you use this link Yinspire earns a small commission.