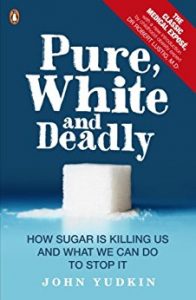 The full title of this book is “Pure, White and Deadly – How Sugar is Killing Us and What We Can Do To Stop It” – and as the title suggests its an exposition of the harm that refined sugars potentially do to us.  This is not a new book – first written in 1972, updated 1986 and re-released with a new forward in 2012, following the authors death in 1995.

For anyone looking in from the outside nutrition and diet advice seems to change often, and its easy to wonder why?  In particular for many years fat was the object of nutritional scientists ire, and even now society has a cultural wariness of fat in food.   Yet in moderate quantities fat is not only not harmful for us but is actually essential for physical and mental health.  Quite often “low fat” in our food chain comes at the price of processing and modification, including adding sugars.

Ah yes, Sugar, possibly the curse of modern diet.  A bit like tobacco, there is a lot of money behind sugar, and a lot of vested interests, yet it starts to become more and more apparent (like tobacco) that it really isn’t good for us – and this isn’t a fad, its good science.   This book is about the authors exploration of the effects of sugar, and the struggle for this to be recognised scientifically.  With hindsight it seems to obvious, but in 1972 – 45 years ago – understanding and culture was different, and dangers of sugar were not recognised or accepted – for a long time the authors work was considered fringe.  Interesting that 45 years on we have “sugar taxes” to reduce the effect of sugar on rising obesity levels?

And we are still learning – even today there isn’t total consensus on things like safe sugar levels, safe and unsafe cholesterol levels, even safe and unsafe BMIs.  Although offical guidance is published on topics like this, when you dig into it quite often there is little evidence to support arbitrary thresholds, and quite often they are best guess that have become set in the proverbial tablets of stone.

The effect of refined sugar on insulin, glucose, bad cholesterol (LDL) is now better known; less known is the effect on mental health and reward pathways in the brain, along with adverse impact on learning and cognition.

This is a book for anyone interested in learning a bit more about what sugar does to us, so informed health decisions can be taken – for people who would rather know than merely accept, and are naturally wary of food labelling and the global consumer led food industry.

Despite its age, its a relevant read, and also a reasonably easy one.  I’d recommend it wholeheartedly.

You can buy the book on Amazon, and using this link enables Yinspire to earn a small commission
http://amzn.to/2B0oyo2