Book: Muscles and Meridians – The Manipulation of Shape – Phillip Beach 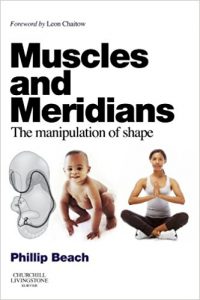 So this wasn’t quite the book I was expecting it to be. Perhaps in hindsight it never could be as the idea of aligning muscles – gross anatomy – and meridians – energetic anatomy would be forced. Although, of course, there has been some research to show meridians can be mapped on the physical body – I’m thinking of Dr Motoyama’s work.

However nothing is wasted; nothing neutral, and this book had some useful content.

The initial part of the book is about embryology – how the fertilised egg becomes human form. My experience is this isn’t something that’s at all easy to understand – presumably unless you are an embryologist – but it’s worth persevering for the insight it brings as to how our final shape comes to be. But you probably don’t appreciate that the first time – or indeed the second or third time – you come across the topic; gradually though it sinks in by osmosis.  I picked up some useful thoughts about limb development and innervation – for example we know that certain parts of the body have stronger neural connections in the brain than others including fingers, hands, feet and toes – it was useful to see this from a developmental perspective, how limbs grow, rather than the neurological basis of talking about developed brain function.

The author relates this embryology to evolution and development; evolution, how we have become the form we generally are, and development, why we move as we do – this is a book about movement after all – and what that means in understanding.  And here we get to the the nub of the authors work, looking at body wide movement patterns from a different direction.  This is something that’s interested me for a long time – by its nature anatomical study becomes reductionist, but functionally we move parts of the body wholesale not muscles individually.  There are many theories around this, Thomas Myers Anatomy Trains perhaps being the best known, and the author adds a different perspective in looking at functional movement; his views aren’t definitive, there really can’t be definitive in these fields, but they certainly add a unique and useful perspective.

The issue of meridians – the subtle channels of Traditional Chinese Medicine – don’t really make an appearance until the end of the book, and the author suggests a theory that they relate to movement and recoil, hence why they aren’t found in lifeless cadavers.  It’s an interesting and different view, and for some will help rationalise the link between the energetic and physical bodies, although this is a 2010 book and thinking has probably moved on a little especially around the emerging understanding of fascia and it’s role in interception and communication – arguably meridians fit in there a little better. But again you will never have definitive answers here, so for the critical reader the more explanations the better.

My comments above may sound negative, they are not meant to be. If you are looking for a manual on movement and meridians then this isn’t it!  But for anyone with a sound grounding in mind body and movement therapies, and an interest in looking at things from a different direction, this is a useful and thought provoking – in a good way – book.

You can by the book on Amazon and if you use this link, Yinspire earns a small commission
http://amzn.to/2xGnn7s