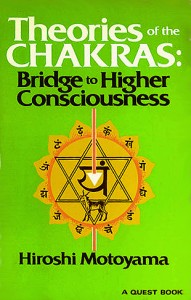 Chakras – strange things. If you attend a yoga class, or hang around the yoga world, you’ll soon hear their mention, along with mystical and sometimes seemingly random attributions of cause and effect to these little ethereal vortexes.

If you take that further and study yoga in systematic greater depth they’ll reappear, maybe with clarity, maybe with more obscurity.

From a personal perspective chakras were something I “got” fairly quickly, and still get. Chakra balancing and awareness is a key part of my regular yoga practice, and I find to be a great way to bring harmony to a life which, unchecked, tends to being fraught.

This little book hails from 1981 and has been on my reading list for a little while – alas I don’t think it’s in print now, Amazon wanted a fortune, eBay delivered this for me at a more reasonable cost.

Dr Motoyama is a Japanese scientist with an interest in both Yoga and Traditional Chinese Medicine (TCM) both from the perspective of scientist and practitioner.

His book doesn’t just cover chakras; there are really three parts. First a romp through established classical yoga, drawing mainly from the Satyananda lineage, and with attention to how the Asana, Pranayama, Bandha and Mudra practices influence the Chakras; secondly a review of ancient and contemporary writing about Chakras and Nadis from both an Indo-Asian and Western perspective; finally some personal theories about alignment of Chakras and Nadis with the Meridian system of TCM.

This first part of the book is very useful in its own right as a refresher on basic practices, and also looking at it from a slightly different angle, the angle of someone not living and breathing yoga to the exclusion of other practices. In particular I found the illumination of the Satyananda Pawanmuktasana (PMA) series useful – it’s fair to say I didn’t initially warm to these practices during teacher training, and indeed the squatting of PMA 3 is still one of the circles of hell for me, although with time I’ve grown fond of the PMA 1 series and parts of PMA 2. Motoyama’s explanation of how the joint movements in PMA 1 systematically free up Meridians of TCM was a revelation, as was the suggestion that the wind releasing practices are as much about Prana as polite flatulence.

The review of writing about Chakras, ancient and modern was useful, dipping into Upanishads, other ancient texts and some modern writing. Motoyama applies a degree of critical thought to his review, as you would expect, and this type of comparative approach is as unusual in yoga writing as it is welcome.

Finally the third section we read of some of Motoyama’s conclusions and the results of experiments he carried out with electronic monitoring of Nadis, Chakras and Meridians – although these were the best part of 40 years ago, and thus reflect the science of the time. Fascinating reading though.

Motoyama’s conclusions are that the Chakras and Nadis are broadly synonymous with the Meridians of TCM, leading to a broad parallel between Prana, Chi and Ki from the respective Indian, Chinese and Japanese systems. He further concludes, disagreeing with some writers he analysed, that these phenomenon are not linked to the physical nervous system; he sees them as separate electrical channels in the body. Quelle surprise modern fascial anatomy now seems to confirm this, at least as far as anatomy, by nature linked to our physical bodies, can go at present.

In all this was a fascinating and useful book, albeit one for the enthusiast rather than the beginner. It’s a book that’s stood the test of time, and rightly deserves reputation as a classic.

Before I close, I ought briefly to touch on what Chakras and Nadis are – I really need to write further about them for my website at some time. In haste:
~ Nadis – channels for Prana in the body. There are considered to be thousands of Nadis in the body, of which three, Sushumna, Ida and Pingala and considered most important.
~ Chakras – meeting places of Prana and Nadis in the body. Commonly understood as whirlpools or vortexes, again there are many of these in the body but there are considered to be seven major ones located, roughly, along the spine, from naval to top of head.
~ Prana – essential life force in the body, often moves with the breath, but distinct from it. “The Spark in the Machine”
~ Meridians – a concept in TCM and acupuncture of energetic channels in the body
~ Chi or Ki – TCMs equivalent of Prana

It goes without saying that none of these can be dissected in a corpse or found in the physical body, and indeed Prana and Chakras are established in the yogic idea of different bodies or sheaves from physical through energetic to spiritual. However, as alluded to above, some current fascial anatomy is starting to find physical parallels to the Nadis and Meridians.