The What and Why of Restorative Yoga 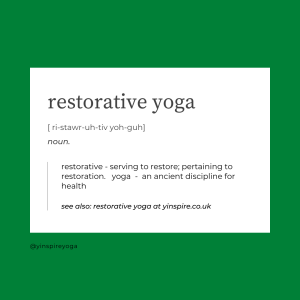 Yin Yoga is my first love, but I err toward the Restorative end of Yin Yoga, and indeed teach Restorative Yoga in its own right.

So, what is Restorative Yoga?   At its simplest it is yoga for the Nervous System and involves very simple Yoga poses held with lots of support for several minutes.  In a typical Restorative Yoga class, you may only do a few postures in an hour.

These gentle supported postures help to calm our Nervous System which can often get stuck in an over stimulated pattern, sometimes called “Fight or Flight”.

So Restorative Yoga, and Restorative Yoga postures, can be useful for people who are experiencing a lot of stress, or stress linked conditions, along with those who are recovering from illness or injury.

It’s quite gentle so more or less anyone can do Restorative Yoga, and as there is no rush everyone has time to get settled and comfortable.  The important thing is not to strive or try and achieve in the postures; rather it’s about simply being for a while.

After a practice of Restorative Yoga, people will normally feel calmer and less edgy, and perhaps better able to face challenges in their life.

As I said, my Yin Yoga teaching errs towards Restorative, and I include Restorative poses often in my classes – although Yin Yoga and Restorative Yoga are separate practices, there is a blurred edge between them.

You can learn more about Restorative Yoga, Yin Yoga and Yinspire at www.yinspire.co.uk , where you can book a class and find out more about my studio between Brading and Ryde, Isle of Wight.