Talk about Yoga. Dear reader, I just did. 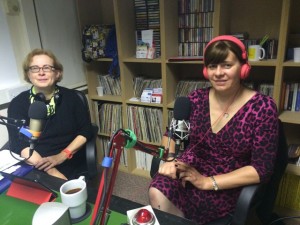 A few weeks ago I was asked if I would like to be a guest on Vectis Radio, a local internet station.  I must confess it wasn’t a station I knew much about, or indeed had listened to, but, well, a chance to talk about something I love so much?  Of course, I said yes.

Vectis Radio is a community station, based at Riverside in Newport, and having previously been Riverside’s treasurer, there was a feeling of nostalga turning into the carpark.  Older, yes.  Wiser, hopefully?

I was due to appear on Judy and James’ weekly afternoon show, which takes a magazine style format.  I suppose I’m light entertainment!

Yes, I was a little nervous, being interviewed isn’t something I’ve done before, other than Alberts Gang on Radio Solent 42 years ago when I was somewhat younger.  Anyway, I was soon put at ease, plied with coffee and water, led into the studio and off we go.

Amid lots of on air, “I’m with Jessica from Yinspire yoga” and “we’ll be back with more from Jessica after the break”, and off air “back in 20 seconds” type things, and some suitable mellow music – Deva Premal was my suggestion, but the additional tracks James chose fitted well – we talked about an introduction to yoga, how I fell into Yoga, Yin Yoga, different types of Yoga and its accessibility to all, and the Island yoga scene.

An hour whizzed by, and soon it was the end of our allotted hour.  I could easily have done another hour; how listeners would have felt, who knows!

All in a days work, and hopefully I sparked some curiosity and helped to share Yoga’s special blend of mind and body wellbeing.

If you missed it – shame on you! – theres a podcast on Vectis Radios website