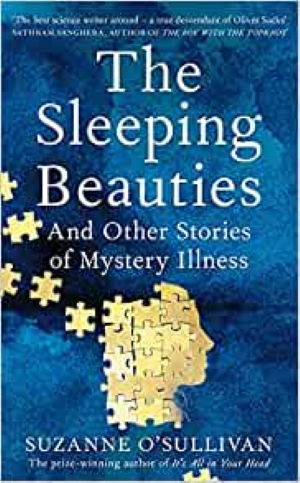 The Sleeping Beauties – And Other Stories of Mystery Illnesses

The author is a Consultant Neurologist, and in this work she is investigating a selection of unusual psychosomatic illnesses – conditions which span mind and body, and which defy conventional treatments.  Amongst other things she investigates refugee children who will not wake up; mystery symptoms of US diplomats in Cuba; clusters of children in one school having seizures.

At first glance this isn’t a Yoga book, so why am I writing about it?  Well, as many readers will know as well as being a Yoga Teacher I am a Yoga Therapist, the latter being a discipline which bridges Yoga and Healthcare, and from that perspective I see many instances where simple solutions are applied without success to more complex problems; this is partly a failing of medics not being as thorough at they might; partly of patients seeking simple solutions – the “pop a pill” culture; and partly a failing of a society where medical treatment is time pressurised and medics are guided toward quick fixes.  But some things aren’t quick fixes, and can’t be cured with a course of tablets – its cases of this nature that the author is considering.

And all of this goes to emphasise how we create false dichotomies of physical and mental health – the Cartesian Divide – whereas in reality the two exist in close interdependency, hence the idea of a BioPsychoSocial model of health, recognising Biological, Psychological and Social influences on health.   In turn this firmly brings us within the ambit of practices like Yoga – so called “Mind Body” practices – where we can work on all these threads.  None of which is, of course, to say Yoga would have cured or prevented the illnesses the author writes about.  But the author’s investigations underscore the importance of a wider approach to health, of which Yoga can be part.

Fascinating reading for anyone interested in Mind Body health.