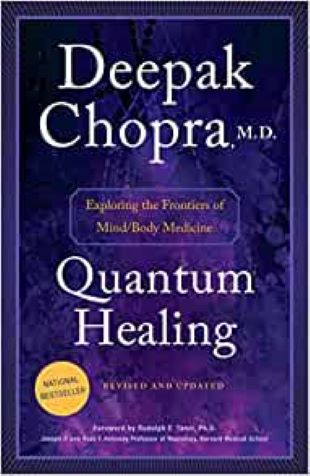 This is one of the seminal works on Mind Body Medicine, but I confess to having become a little jaded by the genre of late, and this book has been on my “to read” shelf for some four years!  However it got there, and on the whole its not a bad work.

Originally published in 1989, this is the 2015 revision and the author takes the opportunity to reflect on developments in the intervening period.   Its fair to say a lot has changed in those 26 years, and much of the authors writing, which would have been radical back in 1989, is now more accepted.  There are two central tenets to his writing.  The first of these is that there is more to healing than medical treatment delivered by doctors, and our own lifestyle choices and psycho- emotional outlook can influence our health and recovery from illness.  The second tenet is that there is more to our make-up than cells and DNA; there is some type of source behind how we develop – this is where his use of “Quantum” comes in, defined loosely as the “smallest unit that can be called particlelike”, thats to say the cause or source behind our makeup – yogis may know it as Prana or lifeforce; Christians as the creator – its stepping outside of science and into philosophy, which is no bad thing, but the boundary does need to be acknowledged.

The problem with this genre of book is that it can be “preaching to the choir”, thats to say those who read it are already to a large degree aligned to its values and content, and thus its message largely fails to reach a wider audience.

For anyone interested in Mind Body Medicine this is an interesting read, but it is grounded more in opinion and anecdote than science, and the tone is a little bombastic.  As I say its not a bad work, but maybe not the best or clearest.  I enjoyed it, and it re-enforced some of my existing learning, but I can’t say I gained a lot from its content.

Quantum Healing can be purchased on Amazon, and using this link earns a small commission for Yinspire.