Books: Full Catastrophe Living and Wherever You are There You Go – Jon Kabat-Zinn 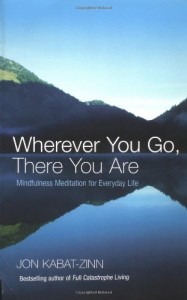 Mindfulness is a buzz word these days, which is not to decry it in anyway, but sometime you have to ask, has it become over used and diluted?

The author of these books, Jon Kabit-Zinn is, arguably, one of the leading exponents of modern mindfulness:

“(I tried to) make the path of mindfulness accessible to mainstream (Americans) so that it would not feel Buddhist or mystical so much as sensible.  Mindfulness has to do above all with attention and awareness, which are universal human qualities”

In essence then updating traditional teachings for the modern day.    Teachings which are just as relevant now, in the days of internet, mobile phones and mass media, than they were when the Buddha originally taught them. 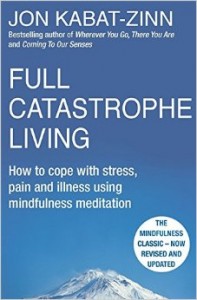 Full Catastrophe Living, running to 600 pages plus appendices, is no light read, but aims to cover “How to cope with stress, pain and illness using mindfulness meditation”, and to a greater degree the content is based around the authors experience as a practitioner and teacher in University of Massachusetts Medical Centre.  Its through, comprehensive, and uses accessible terminology.  Maybe its a little to heavy going, and requires the reader to remain attentive (perhaps, Mindful even – maybe that was intentional!)

Wherever You Are There You Go is a slimmer volume addressing “Mindfulness Meditation for everyday life”, covering some common ground with the first book, but looking at “brief and easy access to the essence of mindfulness mediation and its applications, for people whose lives may or may not be dominated by immediate problems of stress pain and illness.  It is offered particularity for those who resist structured programs… …but are curious enough about mindfulness and its relevance to try to piece things together for themselves”.

Both these books were useful and provoked a few thoughts.  However I think its easy to get into procrastination through reading, particularly given the length of these books, and there is always a temptation to surf from book to book learning rather than doing, and to that end I would suggest to anyone interested in the Mindfulness discipline to start small and experiment with curiosity rather than feeling there are rights and wrongs and you have to do everything in day one.  After all, what could be more mindful than being aware of starting mindfulness rather than just reading about it?

So use these books as a tool, but do the work as well.

These books can be purchased on Amazon, and if you use this link, Yinspire earns a small commission.