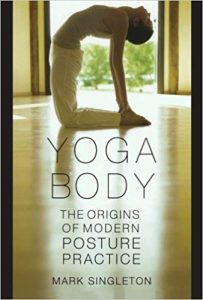 I read this book a few years ago, my notes in the cover say almost five years to the month, and it’s been nagging at me for a reread for a while.

The author sets out to examine the development of development of modern postural yoga – the type of thing that’s the mainstay of our typical classes – during the early 20th century.

For the casual yogi practising in 21st century UK you’d be forgiven for thinking the modern postural yoga practice was centuries old tradition. On scratching deeper it’s not – the earliest writings on yoga make very little reference to postural yoga – the yoga postures we do in class that is – and you’d have to get to the 1500s and the Hatha Yoga Pradipika to find any real mention of yoga postures.

So, then, our modern classes – often called Hatha Yoga – lean on a 500 year old writing?  Not quite. As the author explains Hatha Yoga, or at least it’s practitioners, were outcasts of late 19th century India, considered dangerous and unsavoury.  Gradually there was a two way swap – western gymnastics into India, and a sanitised modified version of Hatha Yoga to the west. That set the early 20th century roots of where we are now, albeit with twists and turns on the way, and with a fair few charlatans on the road, eg Pattabhi Jois – who seems to be at best evasive about the origins of the Ashtanga Vinyasa practice based on claims of an ancient text eaten by ants shortly after he read it (really), and that’s before the sex abuse scandal of later years which came to light after this book was published – and more recently Bikram Choudhury.

Our modern day yoga practice draws on an ancient lineage, that’s for sure, but it’s adapted and changed over years, and any claim that sequences like Surya Namaskara are an ancient tradition is at best unproven, more likely not correct.

Does that matter? Maybe, maybe not. However in a world where a lot of yoga teachers defend their linage passionately, sometimes forcefully, and there are competing claims made about “true yoga” an understanding of history and context is useful. That’s not to denigrate modern derivatives such as Ashtanga Vinyasa or Bikram yoga, but it’s useful to see them as part of a jigsaw not the whole picture.

The author elucidates the subject well, not shying away from the complexity of the topic, and endeavouring to explore modern yogas roots on a researched basis. The nature of the subject is that there will be alternative accounts and chronologies, but I doubt you’ll find many as researched as this one. I’m not sure this is a book for the casual reader or beginner, but it’s one that deserves a read by established practitioners looking to get behind the origins of current practice, and I’d recommend it as such.

You can buy Yoga Body on Amazon via this link