Book: The Polyvagal Theory in Therapy: Engaging the Rhythm of Regulation – Deborah Dana (2018) 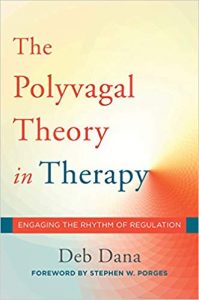 An understanding of Polyvagal theory was part of my training as a Yoga Therapist, and whilst I grasped the concepts remembering them and their practical uses was – and remains – difficult.  The strap line on Amazon for this book is “The polyvagal theory presented in client-friendly language” – and I think that sums up this book well.

Polyvagal theory was expounded by Stephen Porges in the 1990s and suggests that the Vagus Nerve has two evolutionary distinct parts – an older dorsal branch and a newer ventral branch.  You could consider that the older dorsal part is a primitive structure found in many vertebrates, reptiles, and amphibians, whereas the newer ventral part relates to the smart evolution of mammals (including humans). 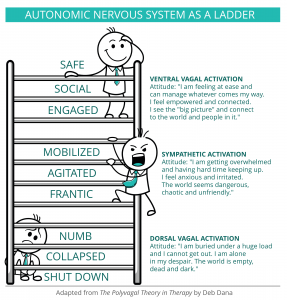 So far so good – two branches.  Where it gets interesting is that the older branch of the Vagus is associated with a freeze response – playing dead – whereas the newer branch is associated with things like calming, soothing and picking up social cues of safety etc.  This leads to the concept of a so called “autonomic ladder” where we move between dorsal vagus – frozen, through sympathetic – energised but anxious and vigilant, to ventral vagus where we are “regulated” – thats to say calm, appropriately using our sympathetic nervous system to respond to threats and situations and then dropping the vigilance when the need is passed rather than staying in a hyper aroused or hyper vigilant sympathetic state.   The author of this book has been at the forefront of developing this autonomic ladder idea.  The author has a useful Beginners Guide to Polyvagal theory on her website.

And to this book.  As the Amazon quote says this book presents to concepts in a user friendly format. This book is written for therapists, but I feel it is also suitable for anyone who is seeking to understand their autonomic nervous system and its way of working, although I would caveat that a book is no substitute for working with a trained professional such as a yoga therapist or other Mental Health Practitioner, especially if you need help to work through issues that are pressing on you.

As well as the user friendly explanation of Polyvagal theory, also discussed is its application, and many exercises are given for working with improving an understanding of how you inhabit your nervous system and how you could regulate better (as mentioned above, these may be best done with a therapist).

In all a good book for making a complex theory simple and practical.  Recommended.

The book The Polyvagal Theory in Therapy: Engaging the Rhythm of Regulation is available from Amazon, and if you order from this link Yinspire earns a small commission.

Autonomic Nervous System as a Ladder image from SequenceWiz with thanks