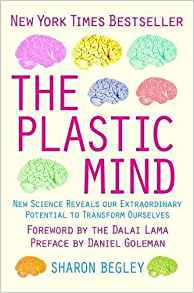 Over the past couple of decades there has been a remarkable change in our understanding of the human brain.

In 1913 Nobel prize winner Santiago Ramón y Cajal wrote “In the adult centres the nerve paths are something fixed, ended and immutable” – and in this context its nerves, via neurons, that make up the functioning of the brain.  The understanding was that once we reach adulthood our brains were fixed and unchangeable.

By 1949 this understanding was changing, albeit slowly, when Donald Hebb coined the phrase “Neurons that fire together wire together”.

Yet it was to be several more years before acceptance of this became widespread and understood, and even now research and discovery continues in the area – as a consequence you really need to date check any reading as things do change.

With the caveat of date check – this was written in 2006 book so over a decade old – comes this book.  It is a scientific work, but from an unusual perspective.

Little known is the interest of the Dalai Lama in the intersection of Eastern mind practices – meditation – and Western scientific understanding, and that the Dalai Lama has regularly hosted meetings of minds with scientists at his residence in Dharamsala.  This book is loosely based around an account of some of those sessions, and in particular the 2004 session on “neuroplasticity” – the ability of the brain to change and adapt.

The book is an account of understandings in the latter part of the 20th century and up to that 2004 meeting, themed around some of the discussion topics and the questions the Dalai Lama asked.

As such is not a academic science work, but an overview and linking together of many threads in the area of neuroplasticity and the science of mind and brain.  And although its over 300 pages its an understandable and easy to follow read

Its a fascinating book, and the format lends itself to an easy read.  This book would be of interest to anyone looking to understand a bit more from a the perspective of a non scientist just what does go on in our brain as our lives develop.

A note of caution – this book is a course book for the Yoga Therapy training I am undertaking at present.  Some of the cohort have found the description of animal experiments in the book to be upsetting, and if these are likely to be a trigger for you then the book may be best avoided.

The book can be purchased on Amazon via this link, which earns Yinspire a small commission