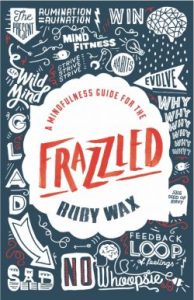 This is Ruby’s second book about the mind and mental health; as I recall the first was about her journey through understanding the workings of the brain and mind, this second is a look at the techniques of Mindfulness to bring the mind into check.

The question is often asked, is Mindfulness, Mediation and Yoga the same thing? In many respects I would say yes, they are to a large degree techniques for achieving the same aim, control of the mind. Not control as in developing the mind to memorise the phone book backwards, but control as in taming the wandering pernicious aspects of the mind and sub conscious, the bits that constantly recite the negatives, the bits that constantly react in unhelpful way, the bits that constantly criticise and create internal storms. If we go back to the Yoga Sturas, the very first verses translate as “Yoga is stilling the thought waves of the mind”; Mindfulness, and its subsets Mindfulness Based Cognitive Therapy and Mindfulness Based Stress Reduction, all stem from a similar Buddhist approach to this, albeit with the belief aspects left to one side.

There are many roads to the same destination; for some Yoga, for some Meditation, for some Mindfulness, and for many a combination thereof.

Early in the book, “Frazzled” is defined, “someone stuck in a state of frazzle… …constant stress is overloading their nervous system, flooding it with cortisol and adrenaline; their attention is fixed on worrying them and not the job in hand, which can lead to burn out”.

The exploration is peppered with Ruby’s own personal journey, by all accounts an uncomfortable one, and what feels like searing honesty, “Mindfulness is the only thing I know to do that can dig me out of despair and give me a few moments break from my brain”. The recollections include an interlude covering a severe depressive attack she experienced in the midst of writing the book; the easiest thing in the world for an author to do would be to gloss over that, an you have to commend her honesty and courage for recounting her experience warts and all.

A four week Mindfulness programme is given, along with sections about Mindfulness for children, teens and parents.

The book closes with a summary of some recent research, including the authors own brain scans.

This is a very accessible book, and Ruby’s own personality shines through. It’s irreverent in places, perhaps even comi-tragic, and very much written for the lay and curious rather than being an academic treatise.

For me the books special charm is its accessibility and the rawness of Ruby’s account of own experiences.

Definitely, worth a read.