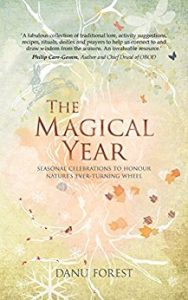 Its fair to say until I met yoga my spirituality was best described as “low key Christian”.  One of the great gifts yoga has given me is the curiosity, and tools, to explore a wider spiritual map, drawing into my still firm Christian faith elements of eastern belief structures and from world humanistic and world based beliefs; perhaps there is a resonance here of “no one answer”.

Its from that spirit of enquiry and learning that I stumbled on this book, subtitled “Seasonal Celebrations to Honour Natures Ever Turning Wheel”.

The book is a delve into the seasons as understood from a Celtic perspective – one where belief and nature are intertwined, reflecting the closeness of human kind to our environment.

The focus of the book is around the eight seasonal festivals of Celtic law – Imbolc, Spring Equinox, Beltane, Summer Solstice, Lughnasdh, Autumn Equinox, Samhain and Winter Solstice – corresponding to our four main seasons and the transitional periods from one to another.  The author takes each in festival in turn, and looks at if from both a theoretical and practical standpoint, the practical aspect being around crafts, cooking, meditation, decoration and observance to honour the season.

I think she succeeds well, with a good balance between explanation and practice.  Although not a short book, its an easy one to read as after the introduction to each season the practical aspects can be focused on in more or less detail according to personal preference.   Indeed, I think this will be a book which will be used as a “dip in, dip out” reference – and in fact I’ve used it just that way this week in thinking about some meditative themes for classes in the run up to Christmas.

I’d recommend this book to yoga teachers looking for some ideas to tie classes in with the cycle of the seasons, and to anyone interested in learning more about the Celtic traditions around nature and spirituality – a book for seekers and enquirers.

Its in stock on Amazon, and Yinspire obtains a small commission if you order with this link