Book: Heirs to Forgotten Kingdoms: Journeys into the Disappearing Religions of the Middle East – Charles Russell 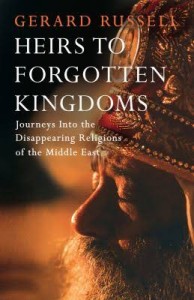 Living in the rural outskirts of England, it’s easy to become distanced from the world around us, it’s trial and tribulations, viewing it as images in the media, rather than the stories of real men, women and children.

No where more prominent is this detachment than the Middle East: far away and war torn, many of us may feel.  Yet in this internet and jet travel age, for better – culture – for worse – extremism – we live in a global village.  So, what of our neighbours in that part of the world?

Written by a former British diplomat to the region, this book delves into the intertwined social and religious beliefs of a region that was, quite literally, the cradle of humanity, and a crossroads between ancient lands and cultures.  It’s easy sometimes to view this region through the filter of war and disturbance, Christian v Muslim v Jew, but in many respects these is an approach both simplistic and modern.

We meet Mandeans, Yazidis, Zoroastrians, Druze, Samaritans, Copts and Kalasha; we learn how how modern handshake stems from Yazidi custom, we learn the traditional pre revolution Iranian Shah’s view of “If you lift up a Mullah’s beard you will find ‘made in Britain’ stamped on his chin”, we learn the context of the biblical Good Samaritan, we learn how the Magi of the Christian nativity story may have been Zoroastrian wise men.  How these faiths were born, prospered, struggled, adapted and evolved is discussed in historic context; the influences of Ancient Greece and Rome, the similarities and differences to modern large adherent religions.

For those of us exploring yoga and Asian inspired spirituality in a western Christian context – and I write as a liberal evangelical Christian – the parallels and influences are fascinating and intriguing.  Take the Druze idea of “the world is part of God in the same way that the dream is part of the dreamer.  Separating oneself from God and thinking of our separateness is evil.  The ego is in individuals who are otherwise emanations of God.  The ego comes necessarily.  And what can we fight it with?  With love.  Love and by accepting that we are part of the cosmic order.”.  Erm, remind you of anything said in a yoga class recently?

The epilogue touches on how diaspora are making new lives in the west, sometimes though at the expense of diluting tradition and culture.  You are left wondering about the long term epilogue; in centuries or millennia to come will the disappearing religions include Judaism or Islam?  Would an author in a thousand years time refer to the Taliban or ISIS in a similar way?

A fascinating read for those with an interest in history, belief and culture, and a wish to expand horizons a little.