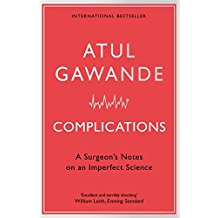 I’ve reviewed another of Dr Gawande’s books – Being Mortal – previously. This is actually an older work of his, dating to 2003 – but contemporary none the less.

The subtitle is “A Surgeon’s Notes on an Imperfect Science”, and was written towards the end of his medical training as a surgeon. Other than curiosity is perhaps fair to ask what relevance this book has in a yoga context, on a yoga website – my reply is because health is far too important to be left to Doctors – I suspect Dr Gawande would agree.

The book is split into three distinct sections: Fallibility; Mystery and Uncertainty. The first dealing with medical training and mistakes; the second on what the author describes as the “mysteries and unknowns of medicine”; the final part on uncertainty and how faced in a medical context, but also in a more general context.

The underlining theme probably reduces to how we expect our doctors and surgeons to be infallible, to support us at times of crisis, yet on the other hand but there is an inherent limitation in their capabilities – those limitations can be reduced but never eliminated – such is the nature of life and illness.

That said it’s neither a critical or negative book, far from it. Dr Gawande come across as both honest and engaging in his analysis, and invites a degree of critical thinking by the reader.

For any of us who use doctors or get ill – yes, all of us, including Yogis – this is a fascinating discourse. The last chapter is especially interesting, dealing with a case of intuition – a hunch, an outside possibility – which proved right, and critical in his patients treatment. He discusses here not only the medical aspects of the case, along with his intuition, but also intuition in other contexts, citing the example of a fire commander who pulled his crew out of a building on a unexplained instinct, moments before it collapsed. Many of us will recognise that intuition – surprisingly it has come up a number of times in my other career, accountancy; something feeling “not quite right” uncovers a hidden issue. I guess intuition, sixth sense, ESP; all of these and none of these.

In all a readable work, and thought provoking without being overly heavy. Worth a read for any one interested in the human body, medicine, health and well-being.

Buy from Amazon using this link, and Yinspire earns a small commission
https://amzn.to/2l7xRbo