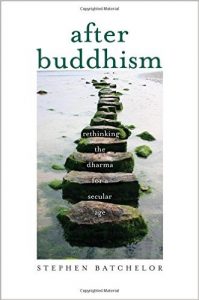 The subtitle to this book is “rethinking the dharma for a secular age”, and the author, a former Buddhist Monk, sets out on a task of trying to get back to Buddhism’s roots, and filter out the additions of dogma and tradition over the years, aiming to find the essence of the original Buddhist Dharma.   He does this by going back to source writings and trying to paint a picture of Buddha the man rather than Buddha the modern day figurehead of the tradition.

Perhaps one question that arrives is “why?” – here the author says:

“The book is an attempt to synthesise an understanding of Buddhism that I have been working on since my first publication…  …What does it mean to practice the dharma of the Buddha in the context of modernity?”

“Total immersion in a living Buddhist culture allowed me to acquire an intuitive familiarity with a complex world view worked out and articulated over many centuries.   This familiarity provided me with the framework, concepts and terminology needed to rethink the dharma. I seek to torque that logic to bring the dharma into closer alignment with the needs and concerns of people living in modernity.  In attempting to come up with a coherent and consistent account of Buddhist thought and practice, my aim is to produce what in Christianity would be called a systematic theology.”

I can see a lot of parallels between what the author is trying to achieve and a similar secular approach to Christianity – secular in the sense of being outside of the established church.

Does it work?  Well, as someone who knows comparatively little about Buddhism beyond some basic concepts, I found the book an interesting and illuminating read, which made considerable sense.   It was helpful to me in distilling a little more understanding of Buddhism and its principles, and it reinforced some of the existing knowledge I had.

This book isn’t in anyway a “how to” about Buddhism, and neither does the author direct the reader with instruction in Buddhism, instead we find an exploration of the basics of the Buddhas personal teaching, and what these meant in the context of the society and time he lived in.  That may make it sound like a biography – it certainly isn’t that, but the authors attempt to explain the “man behind the myth”.

Its a book I would recommend to anyone curious about seeking to learn a little more about Buddhism and how its concepts may influence daily life.

The book is available on Amazon.