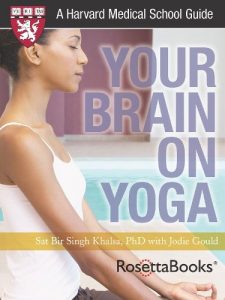 Behind the day to day yoga we practice – whether in a class, in our home, maybe squeezed into a train journey (always a good time for me to slip on headphones and do a deep relaxation) there is a richness of scientific benefit alongside just feeling brighter and better – and lets not decry those last factors at all, they are not to be discarded lightly.

Sometimes you hear yoga described as an “ancient science” – possibly it is, in that the early adherents took an experiential and experimental approach to yoga practice to raise their awareness, although probably not in the way we understand science today.  Perhaps science has become more technical leaving experiential behind for hard facts.  Yet, there is a modern day science as well, a lot of it being aligned to the learning I am currently undertaking around Yoga Therapy.  Yoga Therapy is an evidence based practice, relying on research for both the efficacy of practices and to educate us as to their suitability for our current circumstance.

The author – who I had the privilege of hearing lecture toward the end of last year – is one of the worlds most prominent yoga researchers, bridging the worlds of science and yoga; he  is an Assistant Professor at Harvard Medical School and a yoga practitioner of many years in the Kundalini tradtion, being Director of Research at the Kundalini Research Institute.

I would describe this book as “technical but readable” and – mercifully by the standard of many modern books – short.  Its a romp thorough current research on how yoga effects the brain and our psycho-emotional health, and what can be distilled from this as to how we can simply and easily take care of our psycho-emotional health.  The shortness shouldn’t be mistaken for a lack of thoroughness – sometimes less is more – and the scientists art is in communicating succinctly.  The author does this very well.

Research incidentally, in this context,  is to mainstream scientific standards.  As you would expect given the authors affiliations, whats covered is academic research which stands up to scrutiny rather than lower quality assertions dressed up as research.

For anyone interested in learning a little more about how yoga and science meld, and some of the science behind how yoga can help your psycho-emotional health, this is the book for you.