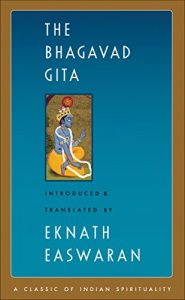 Three of the things – many things – I love about Yoga is the rich heritage behind it; that you can dip into this as much or as little as is appropriate for you; that Yoga meets you where you are.

For some Yoga is a physical practice of fitness or stretching, yet many seek something else, something deeper, and Yoga can draw people in with an invitation to dip into and explore its heritage and roots.  Look at is this way – we don’t pay much attention to the foundations of our house, but we know they are there.  Yet if we were building our own house,. or adapting the one we live in, the foundations would be of more interest.

The Bhagavad Gita is one of the foundation texts of Yoga.  Its suggested it was written fifth century to the second century BCE (source), and its part of a wider composition called the Mahābhārata.   It relays the discussion between the warrior Arjuna and his charioteer Krishna, the later an avatar (incarnation) of Lord Vishnu (for ease of reference, and grossly simplifying an incarnation of the Supreme Deity, or God).  The scene is set on the battlefield where Arjuna is drawn into a battle he would rather not be in – quite simply as his family are on both sides and, naturally, he baulks at fighting them.  The discourse is ostensibly Arjuna asking Krishna for guidance on the moral dilemma.

However the battlefield is, of course, an allegory for life – quite simply at times we have to make tough, unpalatable choices – you can be popular or right, choose.  So this is a discourse on making the right choices in those difficult battles we face daily – ethics simply.  The Warrior is a theme that pervades Yoga, manifested for many of us in the Warrior poses which we take on our mat, where we walk the line between strength and fatigue.

There are no easy answers to our dilemmas in daily life, but we learn a different route to approaching them and a differing perspective, maybe one of detachment.

“You have the right to work, but never to the fruit of work. You should never engage in action for the sake of reward, nor should you long for inaction. Perform work in this world, Arjuna, as a man established within himself –without selfish attachments, and alike in success and defeat. For yoga is perfect evenness of mind. (2: 47–48)”

For anyone wanting to explore deeper the philosophy and heritage of yoga, then along side the Sutras and Upanishads, the Bhagavad Gita is a work I would recommend.   There are many translations of the Bhagavad Gita, this isn’t the first I’ve read, and it won’t, I’m sure be the last.  Like many Yogis I find it a useful work to come back to check in on my motivations and direction.

The Bhagavad Gita (Easwaran’s Classics of Indian Spirituality) is available on Amazon, and if you use this link, Yinspire makes a small commission.
http://amzn.to/2hJJ7wx