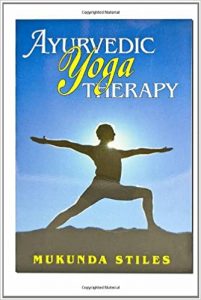 Ayurveda is often referred to as Yoga’s sister science. However in the west it sits in yoga’s shadow.

As a consequence, not only is it it not well known, many yoga teachers – and I include myself – only have a patchy knowledge, hence my interest in this book.

The author puts forward the preposition that “Ayurveda is the science of healing for body and mind, Yoga is the Vedic science of Self Realisation that depends on a well functioning body and mind” (quoting Frawley). However that definition limits itself in seemingly considering only Yoga from the Vedas, which is some of yoga’s oldest philosophical writings – Yoga has developed over the centuries since the Vedas and it could be argued it now occupies a good part of the ground attributed to Ayurveda in that definition, at least in the West.

To me the thinking is slightly limited by the author, and that sets the tone for the book which has a basic introduction to some Ayurvedic principles but stops well short of my understanding of Ayurveda’s scope. Instead it focuses on a collection of Yoga principles which may be considered therapeutic, but to my mind would stop short of being Yoga Therapy or Ayurveda.

In short a rather disappointing work, and in my view of limited practical use. It certainly gives a useful, if not particularly clear, introduction to different Dosha types and qualities, but apart from that doesn’t really offer much about using Ayurvedic wisdom in practice.

As background reading for a Yoga Teacher or Yoga Therapist it serves an introductory purpose, maybe to for the Yoga student looking to get a first introduction to Ayurveda, but its far short of being a comprehensive work.

Ayurvedic Yoga Therapy by Mukunda Stiles can be purchased on Amazon, and using this link enables Yinspire to earn a small commission