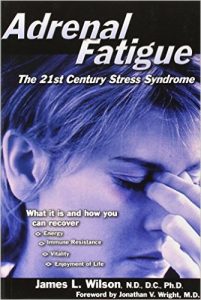 Its fair to say Adrenal Fatigue is a controversial condition, with opinion being split about whether its a true or bogus diagnosis.

The theory goes that stresses and strains of life cause the Adrenal Glands to work sub optimally, but not so sub optimally as to justify a diagnosis of clinical Hypoadrenalism (or possibly Hypocortisolism) which would be indicative of Addisons Disease.  The result is a range of symptoms such as lethargy, decreased tolerance of lifes stresses, permanent tiredness and a general lack of joy de vivre.

The author of this 2001 book is the original proponent of the condition, and this book is his guide to the condition, covering recognising it, treating it and its physiology.  Certainly its a plausible read.  As the author validly points out, the medical profession set reference ranges for measurable levels in the body, in this case Cortisol produced by the Adrenal Glands, and this can lead to missed diagnosis of situations where the level of Cortisol is sub optimal but still within reference ranges.

This theory has been embraced by many holistic practitioners, and a quick check on google will give you access to many resources to test your adrenal function, and suggested supplements and treatments.

Weighing in against this is many – perhaps most – of the medical profession who don’t recognise the condition.  The claim is that the condition is a lifestyle one, “symptoms of life” one source describes it.  Objections may be summarised as:

Whilst writing this review, I found a couple of useful articles from Hormone Health Network and Science Based Medicine and these are certainly worth a read.  Quoting from the former:

“Adrenal fatigue is not a real medical condition. There are no scientific facts to support the theory that long-term mental, emotional, or physical stress drains the adrenal glands and causes many common symptoms.”

And from the later:

“Conclusion: Symptoms are real, adrenal fatigue is not”

This may be the nub of it.  A lot of the suggestions for treating Adrenal Fatigue are lifestyle issues of common-sense around diet, sleep and minimising stress influences.  For any one feeling run down they are no brainers.

Some of the other herbal supplements suggested may, its suggested, be unhelpful or dangerous:

Clearly there is some common ground around lifestyle issues, but otherwise the jury is at best out on the existence of Adrenal Fatigue as a condition.   Personally I’m a pragmatist – there is much that medical science doesn’t know or understand yet, and both scientists and the medical profession are still discovering aspects of our health and make-up.   Maybe Dr Wilson is ahead of his time, maybe he is completely wrong.

So back to the book.  Well, readers will need to make their minds up.  Certainly the book is worth a read with an open mind, but like any health issue it needs to be approached from a position of both scepticism and receptivity,  and its prudent to bring in information from a number of sources when taking ownership of your health and well-being.